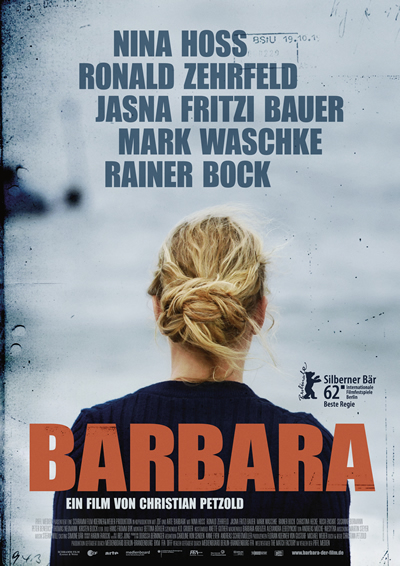 Emblazoned in red across the top of the poster for Christian Petzold’s latest film Barbara is the tag-line: “Anyone who loved The Lives of Others should see this!” Like the 2006 Oscar-winning film, Barbara is a tale of life and love in the former German Democratic Republic – a world of Stasi surveillance, political dissidents, and desperate attempts to lead an everyday life under a totalitarian regime.

Yet it is only at this basic level that the two films are similar. Watching Barbara is a very different experience to The Lives of Others, that surprise global blockbuster which captured audiences’ imaginations with its suspense-filled plot and tale of Stasi redemption. While The Lives of Others borrowed heavily from Hollywood conventions to tell its gripping, moving, yet historically dubious story, Barbara rejects Hollywood – both refusing to provide a neat beginning or ending, and challenging the audiences’ desire to identify with its characters. The film’s focus is instead on the mental stresses experienced by people living in the GDR – a psychological portrait typical of the semi-realist “Berlin School” of cinema with which Petzold is so closely associated. If The Lives of Others encouraged its audience to engage emotionally with its story, Barbara, on the contrary, largely keeps us at a distance: as detached from the film as its heroine is from her surroundings.

The film’s plot is simple: Barbara (Nina Hoss) is demoted from a high profile position at the Charité hospital in Berlin to work in a regional hospital in Mecklenburg-Vorpommern, as a punishment for applying for permission to leave the GDR in order to be with her lover in the capitalist West. As she bitterly complains, she will never be allowed to leave the GDR, since “the workers have paid for my training, and now I must pay them back”. Barbara, however, continues to plan her escape from the East, and faces constant harassment from a Stasi agent (ironically named “Agent Schuetz”, or “Agent Protection”). Finally faced with the opportunity of flight, Barbara must make an unexpectedly difficult decision that could change multiple lives, not just her own.

Inside this simple story the film slowly explores a series of political, ethical and personal dilemmas, which Barbara faces. She is fully committed to her escape from the GDR, but also to the Hippocratic oath she has taken to care for her patients – an oath that threatens constantly to destabilise her plans for escape. She senses that true freedom will only come in the West, but also understands that she needs to adapt to her new surroundings in the GDR in order to survive mentally, in case escape should prove impossible. She hides her emotions behind an icy exterior, yet also yearns for affection and love – even if that love is to be found in a fellow doctor (Ronald Zehrfeld) who might well be spying on her for the Stasi. Like The Lives of Others, but in a more psychologically focused manner, Barbara reveals how human relationships and individual morality are constantly eroded by the surveillance structures of the socialist regime.

Despite such subtleties, at times Petzold’s film lurches curiously towards melodrama and cliché. There are plenty of scenes of anxious peering behind curtains at Stasi agents watching on; ingenious hiding places are created for contraband; dramatic escapes are made from prisoner working camps; while Barbara herself faces frequent physical humiliation through intimate body searches. These moments sit uncomfortably beside the wider visual approach of the film, which is subtle and detailed, constantly reflecting Barbara’s own mental state. Barbara’s private and ethical turmoil is reflected, for instance, in the constantly churning sky and wind of her new environment. In a performance that largely carries the film, Nina Hoss treads a delicate line between representing both the toughness of Barbara’s personality, and her fundamental fragility.

Barbara is an intriguing psychological case study of a victim of the GDR who finds her political, emotional and moral convictions tested by the seemingly liberating prospect of escape to the West. What seemed a given – that she should flee – is no longer a given. Perhaps for an international audience it will lack the pace or punch of its showier cousin The Lives of Others – yet with realist commitment it refuses to comfort its audience with neat resolutions. A richly deserving winner of the Silver Bear for Best Director at the 2012 Berlin Film Festival, Barbara demonstrates that there were no simple solutions to living in the GDR, and that charity and forgiveness are not always rewarded, while redemption can come from the most unexpected quarters.