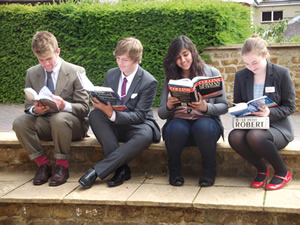 In a workshop run by GCHQ (an organisation that works with MI5 and SIS), small groups used their knowledge of their chosen language to re-arrange letters and words and to translate sentences in order to crack codes. It gave people the chance to use a foreign language to solve problems, which proved to be an enjoyable task.

Product development and presentation skills were tested in the workshop run by Kraft Foods. Each class was split into small groups of pupils, who each had to develop either a new biscuit or chocolate bar. They had a limited amount of time to come up with an idea and to produce a poster to accompany a short presentation. Each group developed a new product, thinking about who it was aimed at, why it was really good, and questions of price and packaging. Then each group presented their idea in front of the class – of course in German, Spanish or French!

In the International Sales workshop, students had to form a company and were then given a list of items to buy and sell. After discussing strategies and prices within the company there was No English Allowed during the buying and selling process. This was a tricky thing to do as there was a €20 fine if any member of a company was caught out! Afterwards, each company finalised their accounts and worked out their profits. Most groups did well, buying all the necessary products and ending up with a small profit.  However, some got into debt from the €100 fine for each product not bought. Buying and selling in a foreign language proved to be a fun exercise for all!

Finally, an introduction to Mandarin proved to be an interesting session, where the students learnt how the language is formed. One challenge was learning how to say each letter – some were very strange to say as they are not sounds used in English. Everyone learnt about the number of initials and finals used in Mandarin and that there are five different tones. It was interesting to see that if the tone of a word changed, the meaning also did. After learning about the sounds (called pinyins) it was time for the most fascinating part – to learn how to form the characters of this pictographic language. The students learnt that the characters are made up of five basic strokes and that when combining them to make a word there is a particular order to use – horizontal then vertical and left falling before a right falling stroke.

The conference ended with a talk from Angeliki Petrits, a language officer in the European Commission, who spoke about the roles of translators and interpreters in the commission and the sorts of tasks involved. She explained that there are twenty-three official languages of the European Commission and that the main languages were English, French and German – and that more native English translators are needed!

Overall the Business meets Languages Conference 2012 was a very successful event due to the variety of activities and information given to the students. It was good for everybody to see the different ways in which languages can help with their future and also gave them an insight into career routes that they may not have thought of. It was a great opportunity for everyone to meet and work with people from other schools and to work together in a foreign language. Some students were even photographed for a piece in the Banbury Guardian newspaper. Hopefully the conference will continue to be as informative and enjoyable as it was this year!