On Monday 24 June, I travelled to Tudor Hall School near Banbury with twelve other Year 10 students, where we took part in a Business meets Languages conference.

After an Ice Breaker quiz to familiarize us with the students we would be working with from other schools, we listened to an interesting speech from John Evans, a multilingual translator from the European Commission, who has used languages in many jobs. 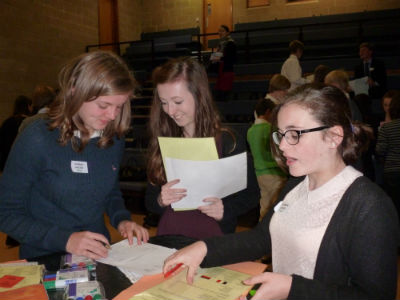 From this speech, we began a series of workshops, with my group beginning with International Sales. The challenge was to buy and sell five things in our chosen language, in my case German. We started off with €500 and got €20 fines if we spoke in English. We had to haggle in German, and try and sell our products. It was great fun and we made a profit of €75.

Next, we visited the Language lab, where Dr Ryland from Oxford University told us all about GCHQ (Government Communications Headquarters) and we had to decipher a coded message that was hidden in suspicious sentences in German around the room. We eventually realized that the ‘Bombe’ was under the table, and I managed to defuse it before the ‘zehn Minuten’ was up.

We were also given a group of what looked like gobbledygook letters, but which actually spelled out German sentences when turned backwards or if letters were taken out. I really enjoyed that part of the day, because it gave us the opportunity to use our languages in a very weird yet wonderful way!

Then, after lunch, we had a taster session in Mandarin. It was so interesting, even in that short time, to get a grasp of the language, and everyone really enjoyed it. Li Li, from Warwick University, told us all about the different tones used in speaking Mandarin, and some of the basic sounds. We learnt how to say hello, (phonetically – ni how) how are you (ni how ma), and goodbye (shi shi). We also learnt some numbers from one to ten, which then allows you to count from 1 to 99.

Finally, we had to pitch a new chocolate bar to Mondelez International, formerly Kraft Foods, Europe’s biggest snack company, in German. This was great fun, as it not only allowed us to practise our German, but our public speaking skills as well. Having said that, however, it was extremely difficult!

Overall, everyone enjoyed the day, and we were all positively challenged to think about the way the languages we learn at GCSE could be continued into different careers, particularly business. Many thanks to all the organisers!