Our furry, feathered and scaly counterparts inspire all sorts of emotion: love and fear, curiosity and fascination, among others. It is also when we mix the everyday and the monstrous that we tap into great creativity, fantasy and enigma. Welcome to the theme of the 2019 Oxford German Olympiad: Tiere und Monster.

We imagine dogs as loyal, donkeys as humble, monkeys as cheeky and rats as sneaky. In giving animals human characteristics, we have made of them amazingly versatile carriers of meaning, and they have long been used by artists to construct coded images which play on the contradictions between their companionship and yet tantalisingly unfathomable inner worlds. While the artist will have their own vision for their artwork, and reason for using certain imagery, including animals still means including an element of mystery - do we really know what goes on inside their minds? The monstrous, meanwhile, allows us to explore the melding of these two worlds - slippage from the familiar animal to the unfamiliar human - to produce creations which defy categorisation, and provoke exploration of the darker, more threatening undercurrents in culture. Albrecht Dürer (1471-1528), a Renaissance painter and artist who was born and died in Nuremberg, made animals and the monstrous the focus of several notable works, including Blaurackenflügel, Das Meerwunder and Hare. These paintings point to the use of animals as formal canvasses for colour and technique, while the engraving explores the mythical elements surrounding how we imagine monsters to be.

Franz Marc is another artist who is famous for featuring animals in his work. His paintings are beautifully vibrant and challenged traditional artistic conventions of his time; indeed, Marc was one of the founding members of the Blaue Reiter group, whose members aimed to subvert what they saw as stuffy and uninspiring cultural norms. Marc used animals as symbols to emphasise the spiritual messages he wished to transmit.

In fiction as in art, the rich associations surrounding different animals make their use as literary devices particularly useful: they can be used to foreshadow events, function as motifs, or induce particular moods such as sympathy or fear. Jeremias Gotthelf's novella Die Schwarze Spinne uses the ominous background figure of a murderous spider to explore themes such as scapegoating and collective guilt, while Kafka's Die Verwandlung confronts the grotesque in the figure of Gregor Samsa, who retains human nature and consciousness after his transformation into an enormous insect. Other German-language fiction texts featuring animals can be found amongst the Grimm Brothers fairy tales, such as their Die Bremer Stadtmusikanten, where animals defy their destiny and come out on top.

The Animals in Our Lives

Many of us will have beloved pets, but what about animals who work for a living? Farm, service and zoo animals, for example, all have specific roles to do - from providing labour, learning opportunities and entertainment to providing invaluable help in emergency situations.

Click on the image below to see a video of swimming elephants at the Zürich Zoo, where visitors can observe 370 difference species of animal in spaces designed to resemble their natural habitats. Visiting a zoo gives you the opportunity to 'travel' to continents far away, via the medium of their animals, without leaving your home country! They are, of course, also the subject of debates ranging around topics as diverse as animal welfare and species conservation. 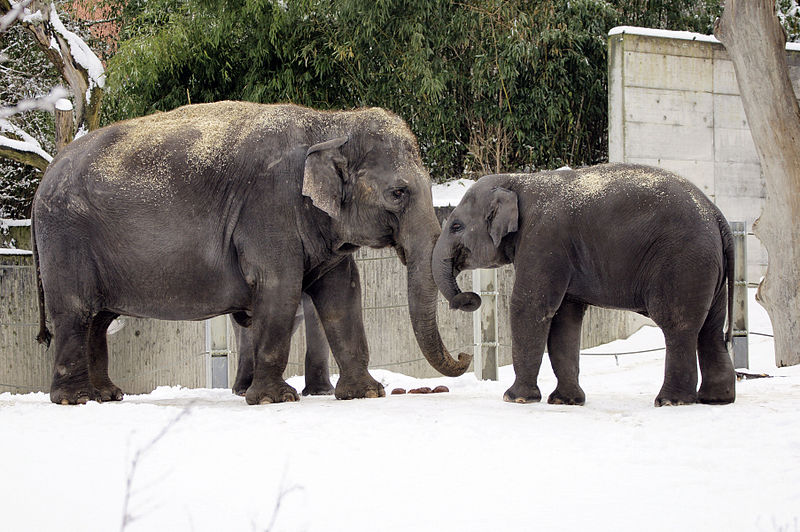 The success of Michael Morpurgo's War Horse has also ignited interest in the role played by animals in times of conflict. During the First World War, for example, horses provided an invaluable source of transportation of people, materials and resources as well as, undoubtedly, moral support.

The humble pigeon also notably facilitated communication during the Siege of Paris in the Franco-Prussian War of 1870-71 and the First World War where normal lines of correspondence had been destroyed or were liable to be intercepted.

Our relationship with animals can lead to ethical debate about our treatment of them. Charities in German-speaking countries such as the Tierschutzbund spread awareness and mount campaigns to, variously, improve living conditions for farm animals, encourage open-mindedness towards more animal-friendly lifestyles such as veganism and help neglected domestic or street animals.

Meanwhile, Tierversuche, or experimentation on animals to advance scientific research in, for example, the beauty industry, remains a lively locus of discussion. Weleda, a cosmetics and health company founded in Switzerland in 1921 by Ita Wegman and Austrian national Rudolf Steiner, does not test any of its ingredients on animals. Similarly, the German cosmetics giant Nivea has pledged to significantly and steadily reduce its reliance on animal testing, instead opting for alternatives such as in-vitro techniques. Currently, products produced by its organisation Beiersdorf will not have been tested on animals, while the same cannot be said for those produced in countries where animal testing is a legal requirement.

What is a monster? Would we always recognise them if we saw them, and do they only exist in fairy tales? The concept of monster pushes the boundaries of our imaginations to create all kinds of not-quite-human figures which make us confront the roots of our fears, show us new ways of being, and create bridges between different worlds. From the scheming wolf in Rotkäppchen to the witch in Hänsel und Gretel, monsters confront our reluctance to approach the unstable and unpredictable. German folklore has featured variations of the monstrous such as the concept of Ungeheuer, Werwolf and Wechselkind (changeling), and protections against monstrous threat such as Wolfssegen which often involve mythical or religious notions of evil or a devil figure.

Many artists from German-speaking countries have used the monstrous in their work, among them Edvard Munch with his Love and Pain (Vampire) (1895), Wilhelm Trübner's Medusenhaupt and Franz von Stuck's Medusa (1892).