By Tom Jewell, a sixth former at Radley College

On Tuesday 2nd February Radley’s JCR hosted the annual Oxford German Network (OGN) ‘Kneipenquiz’. In what was probably the largest turnout to date, about 60 German students and teachers from schools around the Oxfordshire area, along with OGN Ambassadors from Oxford University, all turned up in the hopes of being crowned champions of the prestigious event. 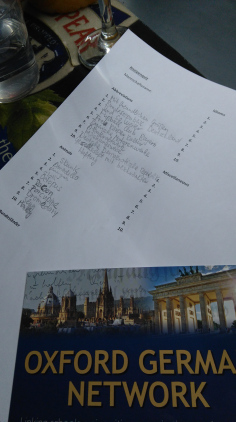 Before the quiz itself, we played ‘Nur noch 60 Sekunden’ or ‘Gone in 60 Seconds’ whereby we went around the room and chatted with someone new, in German, for a minute before moving on. Whilst this was good language practice and a nice way to introduce ourselves, this also gave everyone the chance to acquire some useful assets for their teams, as there was a maximum of two people from each school on one team.
The quiz consisted of various rounds on different aspects of German culture; from idiomatic phrases to capital cities of the Bundesländer. This ensured that everyone had an area in which to contribute. However, it was the ongoing ‘bonus’ round, in which London tube stops needed to be translated back into English from the literal German, which really separated the wheat from the chaff. 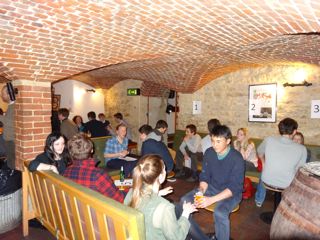 I would like to be able to say that the night went off without scandal, but the teachers’ team was controversially disqualified for cheating – having achieved a near perfect score – leaving one of the student teams, ‘Traummannschaft’, to claim the much coveted Haribo prize.

I would like to thank everyone who came along and also to thank Mr. Cresswell for organising such a fantastic evening.  We are all looking forward to next year's Kneipenquiz!