Music and Poetry in Germany, Austria and Switzerland

View the winning entries for the Oxford German Olympiad 2015 - and all the Round 2 entries - here! 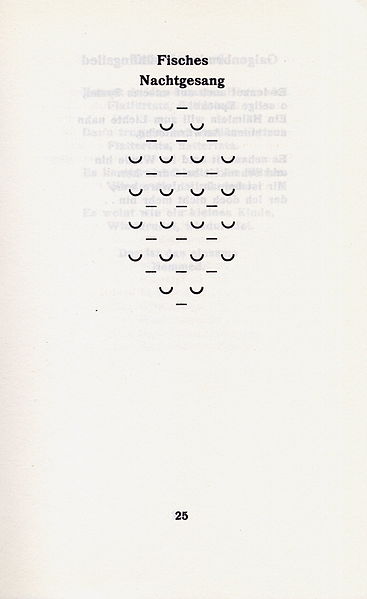 Concrete poetry breaks the mould of how we usually think about word and music or word and sound: it plays with the phonetic, visual, and acoustic aspects of language to produce poetry that is 'concrete'. Another way of thinking about this is 'shape poetry'. The Swiss poet Eugen Gomringer (b.1925) is often considered the 'father of concrete poetry' - you can hear (and see!) some of his poetry here. Reinhard Döhl's (1934-2004) concrete poem 'apfel' (1965) is considered a classic example of the form (click here and see if you can find the worm in this poem...!), although other, earlier poets - such as the humorous poet Christian Morgenstern (1871-1914) in some of his Galgenlieder (Gallows Songs, see image above) - also experimented with the 'shape poem' form and the phonemic dimension of speech.

Influenced by the Dada artistic movement, modern poets also play with sounds, words, and concepts, creating poems that can look like nonsense on the page and only come to full rhythmic and textual expression when spoken out loud. Austrian poet, Ernst Jandl, believed that even the most difficult subjects could be transcended by poetry, as in his phonetic poem on war 'Schtzngrmm'. You can listen to other poets reading their work here. 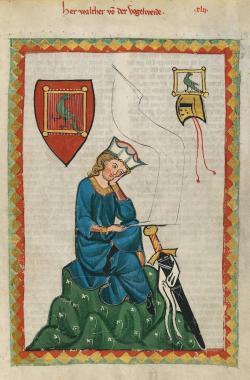 Minnesang comes from the Middle High German word for love and it focused on themes from the courtly love tradition of the 12th to 14th centuries. It is thought that the Minnesang poets (and their audience) were largely members of the nobility and of the noble courts. One of the most famous Minnesänger was Walther von der Vogelweide (c.1170-c.1230), whose poem 'Under der linden' is one of the most famous of his oeuvre (click here for a modern German version and here for an example musical interpretation). It is difficult to precisely identify a melody and rhythm for many of the lyrics from this period, as medieval musical notation is very difficult to read and few of the lyrics survive in their original form. The Codex Manesse is the most comprehensive surviving contemporary anthology of Minnesang poetry.

In the 15th and 16th centuries, Meistergesang was a form of lyric poetry composed by members of urban guilds according to strict rules concerning subject matter, rhyme and manner of performance (including a prohibition against publication, so all Meisterlieder could only be disseminated in manuscript form). The songs are typically divided into three strophes and set to a number of melodies that only certain Meistersinger were qualified to compose. The Meistersinger would meet several times a year to hold competitions. The Meistersinger of Nuremberg - especially Hans Rosenplüt, Hans Folz and Hans Sachs - are particularly well known, but there were also Meistersinger in Strasburg, Augsburg and Colmar, among other towns. 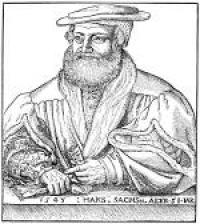 Hans Sachs, a shoemaker, was the most prolific Meistersinger, writing approx. 4000 songs, including the early song 'Ein schone schulkunst, was ein singer sol singen' from 1514. His most famous work, however, was his best-selling 700-line poem on Martin Luther and the Reformation, 'Die wittembergisch Nachtigall' (1523; The Wittenberg Nightingale). 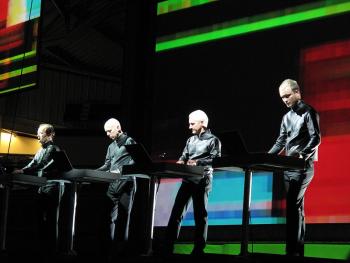 [Above: Kraftwerk play at the Manchester International Festival in 2009]

Modern popular German-language music continues the tradition of putting poetry to music, whether in the genres of rap, metal, rock, or pop. German hip hop in particular is widely respected, with groups like Die Fantastischen Vier, Bushido and Fettes Brot paving the way for a distinctive German brand of hip hop in the 1990s. Because of its rhyming and catchy rhythmical patterns and word plays, it is widely used for learning German! Musicians with a cause and a way with words can be found all the way through from the simplified lyrics and electronic music of Kraftwerk to punk queen Nina Hagen's 'Unbeschreiblich weiblich' and Rammstein's Seemann (and Nina Hagen's cover of the same song with Apocalyptica, drawing on the German Undine legend) to '90s hip-hop trio Tic Tac Toe's 'Das geht mir auf'n Sack', Sabrina Setlur's media-industry damning 'Ich bin so', to Xavier Naidoo and Söhne Mannheims' 'Vielleicht', to pop Wir Sind Helden's 'Guten Tag' and Tokio Hotel's 'Übers Ende der Welt' - the range of modern German-language popular music is truly extensive. You can find some more helpful links about German-language music here. 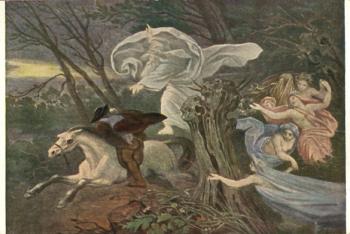 Written in 1782, Goethe's poem about a father's desperate ride with his child to escape the Erlking is one of his most popular and well-known. The poem has received a large number of critical interpretations, which have looked (among many other things) at the father's attitude to his child, the child's strange prescience, and the possible sociological and psychological interpretations of the ghostly figure. The poem was most famously set to music by Frans Schubert in 1821 (click here for a video Dietrich Fischer-Dieskau singing this setting) and by Carl Loewe in 1818. There are many modern adaptations of the song, including by Rammstein, Achim Reichel, and Falkenstein, as well as parodies, for example by Heinz Erhardt and Otto Waalkes. 'Die Lorelei' by Heinrich Heine has also been set to music many times and remains a popular motif in music. 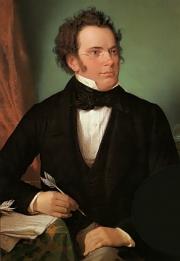 Franz Schubert (1797-1828) composed the music for several hundred Lieder - he composed 140 in 1815 alone. His two most famous song cycles Die schöne Müllerin (1823; The Beautiful Miller; 20 songs, including the now famous song 'Das Wandern') and Winterreise (1828; Winter's Journey; 24 songs, here in part 1 and part 2) are both based on poems published in 1820 by Wilhelm Müller (1794-1827). Both cycles relate the narrative of a young man's journey into and out of love, and the songs become increasingly dark and despairing. 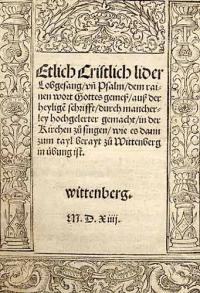 [Image right: Title page of the Achtliederbuch (1524), the first Lutheran hymnal. Click the image to see a list of Luther's hymns.]

In the German Reformation, Martin Luther (1483-1546) believed song was very important as a way to teach, support understanding of Christian teachings, and to deepen faith in the congregation, and this contributed to fundamentally altering the way that singing occurred in church. The first Lutheran hymnal was published in 1524 and contained just 8 hymns and are often considered the earliest Lutheran poetry. Among the early Lutheran hymn writers were Luther himself, Hans Sachs, Nikolaus Hermann, Elisabeth Creutziger, Johann Walther, and Paul Speratus. The hymns could be catechetical hymns (e.g. 'Wir glauben all an einen Gott' - We All Believe in One God), versifications or meditations on psalms (e.g. 'Aus tiefer Not schrei' ich zu dir' (From Deep Affliction I Cry Out to You) is based on Psalm 130), liturgical hymns, and so on. Some songs were even intended as polemic resistance songs (such as 'Ein neues Lied wir heben an' - A New Song We Raise) and many are still sung today, such as 'Ein feste Burg ist unser Gott' (A Mighty Fortress is Our God), which became a popular song for soldiers in World War I. Possibly the most famous settings of Luther's hymns are those by Johann Sebastian Bach (1685-1750).

Slam poetry originated in America but is now big in Germany. It combines voice, sound, rhythm and choreography to produce energetic - often electrifying - live performances. Bas Böttcher is credited with introducing slam poetry to the German-language scene, and is still the best known performer. Read an English interview with Böttcher here, and watch him perform live here. 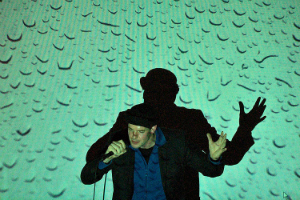 Swiss-German writer Nora Gomringer is another star of the spoken-word scene in Germany, using language in inventive, exciting and often hilarious ways. A true wordsmith, her performances are spellbinding. A number of her poems have also been set to to music by the Wortart Ensemble, and you can watch them all in action here. 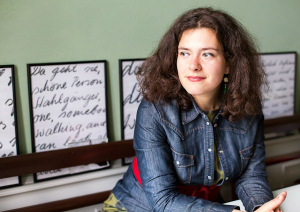 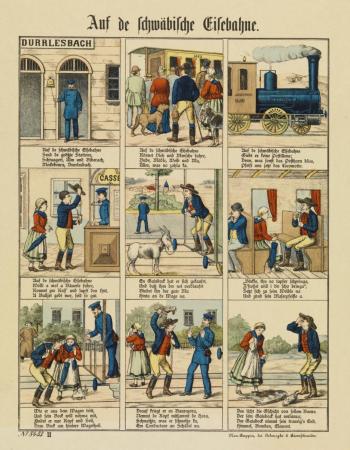 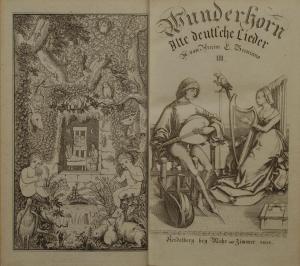 German and Austrian cabaret theatre began in the late 19th century, inspired by the French cabaret. Venues such as Kabarett Hölle and Kabarett Fledermaus in Vienna, Die Katakombe and Klaus and Erika Mann's Die Pfeffermühle in Berlin, the Münchener Lach- und Schießgesellschaft (in Munich), the Nebelhorn in Zürich, and Die Distel and the Leipziger Pfeffermühle in the former GDR span a century of rich - if often tense - tradition in German-language cabaret. The 'Kabarett' became known for its satirical, parodical, and ironical performances, which could be in the form of sketch, stand-up, monologue, or song. A classic song form for Kabarett artists was the 'Couplet', a two-line rhyme that formed the ironic refrain in a song, for example, the socio-political satire, 'Der Papa wird's schon richten', sung in 1958 by Austrian 'Kabarettist', Helmut Qualtinger (1928-86). Claire Waldoff (1884-1957) was a famous lesbian and feminist artist of the Berlin cabaret, singing 'Gassenhauer' (popular street songs) and chansons in Berlin dialect. Some of her most popular songs were 'Wer schmeißt denn da mit Lehm?' and 'Nach meene Beene is ja janz Berlin verrückt'. Karl Valentin (1882-1948) directed the Munich cabaret 'Wien-München' and worked closely with Bertolt Brecht (1898-1956) (Brecht's songs, written with Kurt Weill (1900-50), from his play Die Dreigroschenoper (1928) are well-known in many languages, in particular 'Die Moritat von Mackie Messer', which has become a jazz standard for artists such as Ella Fitzgerald, Louis Armstrong, Frank Sinatra, and Michael Bublé). 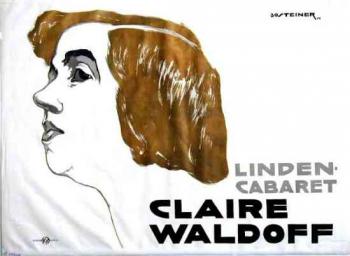