The Wiener Library for the Study of the Holocaust & Genocide is one of the world's leading and most extensive archives on the Holocaust and Nazi era.  Formed in 1933, the Library's unique collection of over one million items includes published and unpublished works, press cuttings, photographs and eyewitness testimony.

The Library provides a resource to oppose antisemitism and other forms of prejudice and intolerance. The Library's reputation rests on its independence and the scholarly objectivity of its activities and publications. The Wiener Library is open to the public on weekdays free of charge. 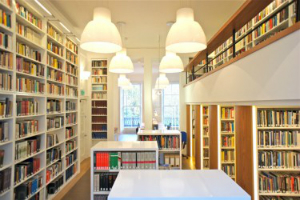 The Wiener Library Translation Competition is part of the Round 2 competitions in annual Oxford German Olympiad. Undergraduates (in their second year or above) and graduates of German studying at a UK or Irish university are invited to enter a competition run by the Oxford German Network in association with the Wiener Library. Entrants translate and write a commentary on an original document from the library, and the winner will receive a prize of £100. Click here for more information. In 2017 there are two documents that should be referred to by entrants: the text for translation can be downloaded here and the accompanying letter for the commentary can be downloaded here.

All entries to the competition can be submitted here.

The Wiener Library for the Study of the Holocaust and Genocide is recruiting three Volunteer Book Reviewers. They are looking for committed and enthusiastic students (Masters or PhD level in a relevant discipline) to review new books on the Holocaust and genocide selected by the Library.

Volunteer Reviewers will be expected to commit to doing at least one review and keep to a deadline for producing that review.

Please email lsidebotham@wienerlibrary.co.uk with a CV and a short covering letter briefly explaining your interest in the role and your skills and experience.